This is a re-print of this blog that we published October 2013.  We have received phone calls from customers and thought it was relevant to re-publish the blog.

Autumn is a time of change as all living organisms prepare for the onset of winter, many birds migrate south, weasels and snowshoe hares change from brown to white fur, leaves change from green to yellow, orange and red, and evergreen trees and shrubs shed old foliage.

When needles on spruce, pine, fir and arborvitae turn yellow or brown in autumn and eventually fall to the ground, it is a normal part of the rhythm of the four seasons.  Just as vigorous new growth erupts from all sorts of plants each spring, evergreen trees go through a perfectly normal needle shedding toward the end of each growing season.  The result is often a beautiful carpet of needles that provide a mulch for the soil surface. 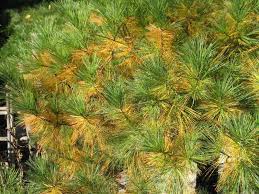 If the foliage / needles of spruce, pine, fir and the arborvitae turns brown and fall off in spring or summer, there is more cause for concern.  Winter sun bouncing off the snow sometimes damages evergreen foliage causing some brown to show up in April or May, and the premature shedding of some needles.  This condition is generally termed winter burn and is briefly annoying, but usually not fatal.  In most cases by the end of June, new growth has developed and provides a fresh and healthy appearance.

If evergreens are browning and shedding in June, July and August, the cause is usually more serious, such as fungus disease of the needles, spider mite infestation, boring insects in the trunk and branches or rotting roots.  While some treatments are possible for these conditions, results are sometimes good and sometimes unsuccessful.

You can rest easy this fall and winter if the shedding of needles from your evergreen takes place from September through December.  It’s as normal as the maple leaves turning fabulous colors each fall, only to send their leaves floating to the ground.