Here’s Leif’s Yard & Garden Notes for June 17. Check out Leif’s articles every weekend in the Saturday Northfield News in the Home and Garden Section (Sec. C) of the paper. 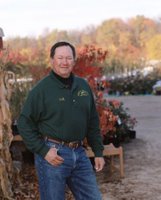 Following the second heat wave this past Memorial Day weekend we received calls from several people who had a recently planted tree or shrub that developed many crispy leaves. Some had left them for the holiday weekend, and others simply unaware that over just a couple extremely hot days, all the moisture available to the plant was used up.

The key term here is available moisture. Until a newly planted tree or shrub that was purchased in a plastic pot is able to extend new roots a few inches into the surrounding soil, the moisture available to the plant is limited for the most part to the water in the plug of roots that came with the plant.

Even if you have watered the plant heavily, and the soil around the root mass is moist, there are no roots yet out in the surrounding soil, and the plant is only able to utilize the moisture in the root mass itself. Under high heat and high wind conditions, the plant very quickly pulls all the moisture out of that plug of roots. Capillary action does allow some moisture to move from moist surrounding soil into the root mass, but this can be a very slow process, and not nearly enough to keep plant leaves supplied with the amount of water they need during a heat wave.

The solution is simple. For newly planted landscape plants that were purchased in a plastic pot, water more often. Apply enough water to completely wet the plug of roots, but do not over water. During high heat and windy periods, we give the potted plants a dose of water every day.

With a watering wand on the end of the hose, and the valve fully open, we give plants from a second to six or eight seconds of water full flow, depending on pot size. Keep in mind that we have pots that range in size from one quart to 27 gallons in volume.

During the four to six weeks when the new landscape plant is gradually extending new roots into the surrounding soil, these frequent and modest waterings will keep moisture inside the root areas, where the plant is able to utilize it. If you have root pruned aggressively prior to planting, tiny new roots should be able to extend out a few inches or more into the soil during the first month and a half. This means moisture is available to the plant from a much larger area, and consequently, the frequency of waterings can be reduced.

In order to make sure that the modest and frequent watering you apply moisten the root mass and don’t run off to the other areas, create a ring of soil around each plant when planting is done. This ring dike will allow the water you apply to soak directly down into the root plug, thoroughly moistening the entire plug. I like to mulch over the dike with 2″ of bark mulch to keep the ring dike intact for the first season.

If you do not aggressively root prune potted plants prior to planting, extension of new roots into the soil may be very slow, which extends the period of time you will need to water frequently and modestly. If you see any matted roots on the outside of the root plug when you slide your plant out of the pot, root prune aggressively with a utility knife, cutting an inch deep or more thorough the root bound mass, at close intervals, all the way around and underneath the root ball. From these cuts, new roots will quickly extend into surround soil.

Note: Watering of balled and burlapped trees and shrubs is very different, usually requiring one or two waterings per week, and more water each time. Never the less, do not leave your hose running on the balled and burlapped plant, and leave the area. You may forget to go back, end up applying too much water, and drowning the plant.

Plant Spotlight: May Night Meadow Sage Salvia. A staple of the perennial garden – this hardy plant with its dark blue flower spikes provides a wonderful focal point to the late spring, early summer garden. Companion plants of yellow Primrose or pink Penstemon offers an interesting palette of color. May Night Salvia will reach a height of 24″ by 18″ wide and with dead-heading, will offer blooms until August!